Even key fobs are the targets of cyberattacks, enabling hackers to steal your car—or worse. Prevention involves new crypto schemes, but only use those that are thoroughly vetted.

Modern cars are essentially software on wheels—“smart” collections of automotive systems, including entertainment, braking, power, locks, window controls, and so on. As the number of electronic control units (ECUs) in vehicles explodes, so do the number of lines of code, presenting a rich field of opportunities for hackers.

In turn, key fobs, the small hardware devices with built-in authentication used to control and secure access to the vehicle, have proven to be low-hanging fruit for cyber criminals looking to attack vehicle systems.

As with other vehicle systems, key fobs are becoming increasingly complex, supporting an array of features. Key fobs not only unlock the vehicle and enable the ignition controls, but can be used to lower windows, open a sunroof, fold in mirrors, and set seat locations and radio channels. Tesla Model S and Model X key fobs can even be used to initiate automated parking and unparking sequences. Hit “Summon” on the key fob and your Tesla comes to you!

These features make key-fob encryption a very attractive target for cyberattacks. The increased functionality results in more data being transmitted over this interface, which means more data for hackers to analyze when trying to break the encryption scheme and clone the key fob.

Most key fobs use a radio-frequency identification (RFID) transponder to enable it to unlock the vehicle and perform a variety of additional functions. The process is:

A variety of attacks have shown that this encryption can be broken, allowing the key fob to be duplicated by an unauthorized party who can then unlock the vehicle and drive off just as the owner would. These attacks defeat the encryption used between the key fob and the immobilizer, resulting in a serious security breach.

While many different key fobs are in use, most utilize similar underlying technologies in their implementation, and in some cases, even the same chipsets. Most key fobs use a form of symmetric encryption. Before diving into the details on the security vulnerabilities in car key fobs, let’s take a closer look at symmetric vs. asymmetric encryption.

Symmetric encryption is conceptually straightforward. It uses a single secret key that is shared by both communicating entities (Fig. 1).

1. Because symmetric encryption shares a secret key with the nodes at both ends of the network link, its security depends on the secrecy of the key.

Asymmetric encryption uses a key-pair consisting of a public key and a private key (Fig. 2). Each node has its own key pair. The private key must be protected and kept secret, but the public key can be shared with other nodes. 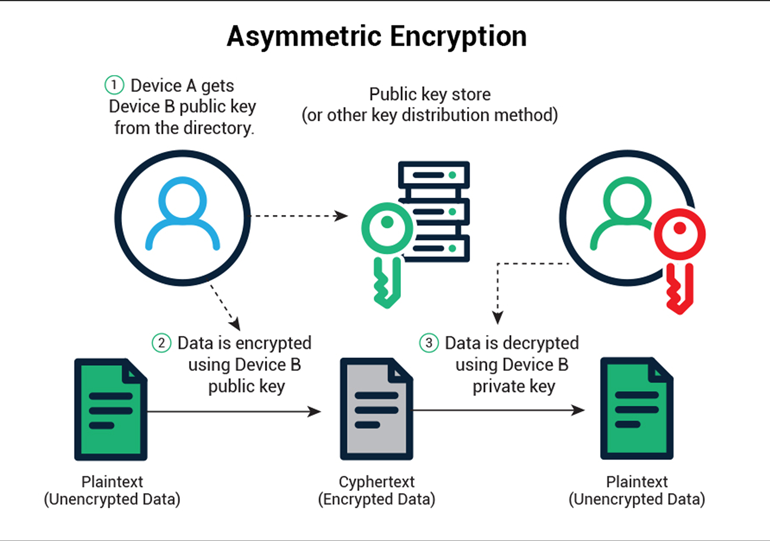 2. Asymmetric encryption uses public and private keys to provide a high level of security. Device A, to the left, uses the public key to encrypt data. Device B then uses its corresponding private key—the only key available—to decrypt the message.

All key pairs are mathematically related to enable encryption/decryption in this manner.

One major shortcoming of asymmetric encryption is that it can easily use 100X more CPU cycles than symmetric encryption. This processing load causes problems for any system, and especially embedded devices that perform time-sensitive operations and/or have limited system resources. The solution is to run an asymmetric session only to create an initial encrypted connection for exchanging a secret symmetric key. Thereafter, that symmetric key is used for the remainder of the communication session.

To date, most car manufacturers have used a symmetric encryption scheme for key fobs, leaving the system vulnerable if the symmetric key is discovered.

A Google search will quickly reveal a large number of key-fob encryption failures. Because automakers often reuse technology across model years, an attack found in one vehicle may impact other vehicle makes and models. Some of the vulnerabilities found in key-fob systems include:

The fundamental issue in each failed scenario was the attempt to utilize symmetric-encryption algorithms for authentication by encrypting a sharing a rolling code used by the car to validate the key fob. Further, use of weak underlying encryption algorithms and other implementation issues exacerbates the problem.

To achieve strong security with key fobs, automakers must invest in hardware that will support asymmetric encryption, ensure that proper key lengths and algorithms are selected, and verify that all keys are generated using sufficient entropy to make sure they’re truly random.

That said, this does solve the problem introduced in many key fobs that were designed to be very low cost. An iPhone has the built-in processing power and security capabilities to enable strong authentication without driving up the cost of the key fob. In addition, Apple has consistently built strong security into its products, and they’re unlikely to make the security errors suffered by many key-fob systems.

Other companies are also working on smartphone applications as well as implementing biometric authentication solutions to replace or augment key-fob-based solutions.

Cryptography is hard. New crypto schemes are widely accepted only after thorough and broad vetting by many security experts. Virtually all security-critical systems utilize NIST-approved security algorithms with NIST-recommended key strengths. Any time a design ventures away from these approved and vetted security algorithms, there’s risk of vulnerabilities being present in the solution.

When adding security to a device, it’s imperative that care be taken to ensure the system is resilient to common attacks and to utilize a crypto scheme that’s consistent with the protection needs of the device. Using a crypto algorithm because it’s low cost or convenient simply isn’t good enough—especially for the next-generation of smart, autonomous vehicles.

Alan Grau is VP of IoT and Embedded Solutions at Sectigo.