From dongles to diagnostics, here’s all you need to know about OBD/OBD II 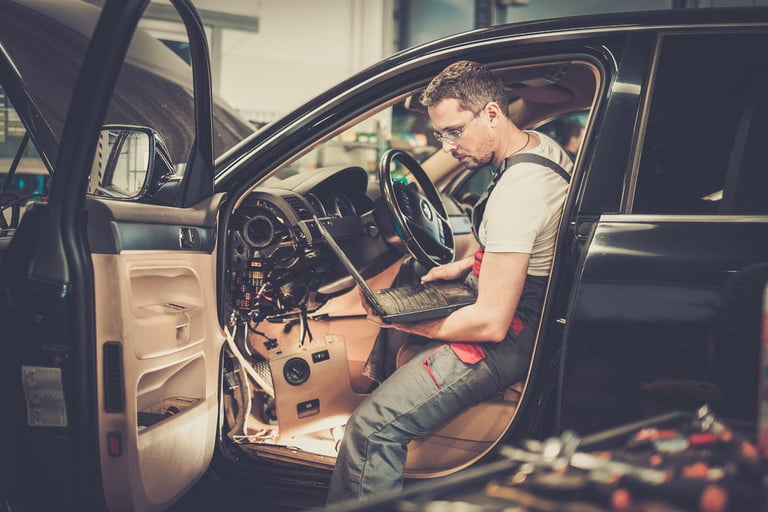 You never know what secrets are hidden under your dashboard. If you own a car built in the last 20 years, that’s where you’ll find the entry point to virtually everything that makes it tick. We’re talking about the OBD II port, which, if you have the right device, lets you diagnose mechanical problems, boost performance, and more. But what exactly is OBD II, and why is it so important to modern cars? We’ve got all of the answers right here.

OBD stands for On-Board Diagnostic. It’s the standardized system that allows external electronics to interface with a car’s computer system. It has become more important as cars have become increasingly computerized, and software has become the key to fixing many problems and unlocking performance.

OBD has existed in various forms long before anyone ever uttered the words “infotainment” or “connected car.” It came about primarily because of two factors: the need to regulate emissions, and the mass adoption of electronic fuel injection by automakers beginning in the 1980s.

Unlike carburetors or previous mechanical fuel-injection systems, electronic fuel injection (EFI) requires computer control. Like its predecessors, EFI regulates fuel flow into the engine, but it does so using electronic signals rather than mechanical bits. That created the first major need to put computers in cars.

Several automakers introduced computer interfaces for their own cars before the 1990s, but the push to standardize didn’t begin until 1991, when the California Air Resources Board (CARB) mandated that all cars sold in California needed some form of OBD capability.  However, CARB didn’t issue standards for the systems until 1994. Known as OBD II, that standard was implemented for the 1996 model year, and is still in use today. Previous iterations of OBD were retroactively classified OBD I.

Virtually every new car sold in the U.S. over the past 20 years follows the OBD II standard. OBD II cars have a port — usually located under the dashboard on the driver’s side — that devices can plug into and connect to a car’s computer. Companies have plenty of ideas about what you can plug into that port.

As the name implies, diagnostics are the primary purpose of OBD. When a car’s sensors decide that something is amiss, they trigger a message known as a “trouble code,” which may manifest as a “check engine” light or other warning on the dashboard. OBD scanners can check these trouble codes to determine exactly what’s wrong, and clear them from the computer’s memory once the problem is fixed.

The trouble codes are just that, though: codes. Instead of a diagnosis like “loose gas cap,” you will see a string of letters and numbers that is incomprehensible without a reference. Trouble codes start with a letter and include four or five numbers, which together point to the specific subsystem and what problem it is experiencing.

Some OBD scanners come preloaded with definitions for these codes, but otherwise you’ll need a list like the one that can be found on OBD-Codes.com. Note that in addition to the generic codes that apply to all cars, individual manufacturers have their own specific codes. Finding these can be a bit trickier, as not every manufacturer is entirely comfortable with the idea of releasing them to the public.

Diagnostics may be the most important function of OBD equipment, but these tools can also be used to make your car go faster.

Several aftermarket brands offer both OBD II data loggers and performance tuners that access critical vehicle systems through the dashboard port. Data loggers can be used to track more mundane things like fuel economy, but they can also record things like lap times and power output. Professional racers rely on this data to see how they perform on a track and to tweak their cars, so why shouldn’t you?

Some companies also offer performance upgrades for specific vehicles that remap or alter software to unlock horsepower. Since modern vehicles are so dependent on computer controls, software changes can be as effective as bolting on a new air intake or exhaust system. It’s worth noting that these upgrades may have negative effects in other areas — such as reliability or fuel economy — and may void the factory warranty. Check before installing.

Not everyone has the wherewithal to try to fix their own vehicle or upgrade their performance. Recently, companies have tried to exploit OBD II for more mainstream applications in the form of “dongles” — devices that plug directly into the OBD II port and connect wirelessly to a network.

Dongles are sometimes issued to customers by insurance companies as a way to achieve discounts. This generally involves using data pulled from the car’s OBD II connection to analyze driving habits and award a discount for low-risk behavior. Allstate’s Drivewise program, for example, looks at speed, how quickly the driver brakes, the number of miles driven, and when a person drives.

Other devices — such as Verizon’s Hum — enable telematics features, similar to what some automakers offer through subscription services. When paired with a smartphone app, Hum provides vehicle diagnostics, roadside assistance, stolen vehicle tracking, geofencing, and speed-alert features for parents looking to keep teen drivers on a short leash.

When considering one of these devices, it’s important to remember that the physical separation between your car’s computer and a network that might contain malware is the first line of defense against hacking. Plugging anything into your car’s OBD II port compromises that barrier by giving an external device access to your car’s systems.

In the case of telematics devices that send data across a wireless network, the network connection itself can be a second point of vulnerability. Just like any other connected device, there is no guarantee of invulnerability to security breaches.